Three days a week for 2-3 hours a day, 15-year Olive Garden veteran Jerry Lewis busses tables and scrapes dishes, sporting a broad smile and a winning attitude that manager Tammi and co-worker Jenn would duplicate in every employee, if they could.

MY WORK, MY ROUTINE

Jerry: I clock in. Go back there and scrape for a while, then come out on the floor. I like to come out on the floor when it’s busier, sometimes, you know. I like out here better bussing tables, but I don’t mind scraping, you know.
Tammi: Because he’s asked me to do more bussing, I’ll switch it up. I’ll have a different busser come in and do some scraping so Jerry can be out bussing more. You have a little interaction with the team members when you’re scraping, but out here bussing, with guests, you’ll see him laughing and joking, grabbing dishes out of hands . . . I think it’s just more interactive for him.

Jerry: Every day that I come here be a good day to me! You know what I’m saying? When I’m here, it’s a good day.

Tammi: I’m proud of Jerry every time he comes in to work. He’s always—
Jerry: You too—you too, Tammi!
Tammi: —Really, to have an employee who you ask to do something and who says, “I’ll do it,” who says, “I’ll get it done,” and does it. Who always has a smile on his face, always has a fist pump . . . if only we had 30 more Jerrys!

THESE WORDS DESCRIBE ME

Jerry: I would say I’m friendly. I like to meet people.
Tammi: Dedicated is the word I would use.
Jerry: Yeah.
Tammi: A hard worker. And like we said, he always has a smile on his face. We’ll bring on back six trays of dishes, or he’ll have a whole section to clean up, and he’s laughing; he just gets it done. I’ve never seen Jerry upset, frustrated, mad, any of those things. He’s just good.

Tammi: When I first got here, maybe my second month, I remember Jerry coming up to me first thing and saying, “I’ve been working hard to earn my Olive Garden jacket.” It’s a nice, lightweight jacket with the Olive Garden logo and an employee’s name embroidered on it. We actually have an employee of the month program for team members to earn the jacket. I said, “Ok, well, let me see how you work. Let me watch you, talk to other team members, see how you’re doing, and we’ll see how you can earn that jacket.” When I started talking to team members, they already knew what kind of dedicated employee he was. They were like, “Have you seen Jerry work?” It probably took me less than a week of watching him work to say, “Wow, why haven’t you had that jacket yet?” He can have a whole tray full of dishes, and he’ll have no problem with it at all—he’ll take them all and bring me even more. Jerry, you’re one of the people who definitely earned the jacket. I know he takes pride in it, and he does a phenomenal job.

Jerry: I appreciate that. Appreciate that jacket. Kinda hot to wear it now.
Jenn: It’ll be here before you know it.
Jerry: Yeah, summer goin’ by fast.

WHERE’S JERRY AT? (WHEN I’M NOT AT WORK)

Jerry: I like to play basketball, go to the movies. I
do a lot of . . . a lot of stuff. Go to festivals, stuff like that. The fair. And, of course, checkin’ out the women. [Laughs] Everywhere I go.
Jenn: And he’s honest!
Jerry: I go to church, too. Called the Church of the Living God, right by Washington Carver School. The service starts at 2, get out at 3. Sometimes we have programs going on in the week. Kind of like bible study, you know? Something like that. Like a workshop . . . yeah. Sometimes, yeah. Great people. I get to know them and stuff—I start talking to them like I do.

Jerry: A bunch of . . . a bunch of them have come
and gone. Like Zach. He used to work here. He was a server—his name was Zach. He was a good friend of mine. And Josh, he’s worked . . . he works here now, Josh, one of the servers. He’s a good friend of mine. Jenn, she’s a good friend of mine!
Jenn: And Kevin. I think Kevin’s goal in life is to make you laugh.
Jerry: Yeah, Kevin, yeah. Coworkers talk to me. They joke around sometimes. They pick on me for my name. Jerry Lewis. [Chuckles] Tammi: I’ve never heard anything other than good things about Jerry here.
Jenn: And if someone did say something negative about him, the rest of the employees would be up there defending him. You don’t pick on Jerry around here. Tammi: Like I said, if I had 30 more Jerrys, it would probably make life a lot easier. To have employees who are always positive? The restaurant business can get pretty stressful. To be able to still keep a smile on your face and keep going? I wish I could be that way every day!

Jerry: Life’s too short for a sad face. You know what I’m saying? Pastor said that one Sunday, and I kept it in my mind. 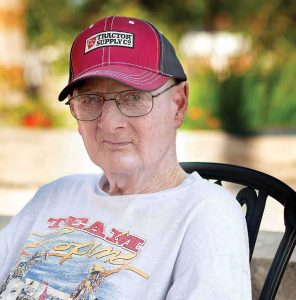 When I Get My Balance Back: Phil Zearbaugh’s Story 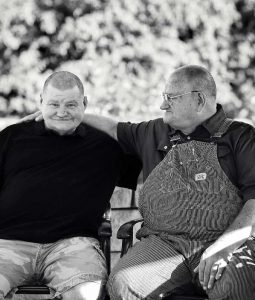