Stopping to Forgive: Beverly Zgunda’s Story About Her Son, Greg 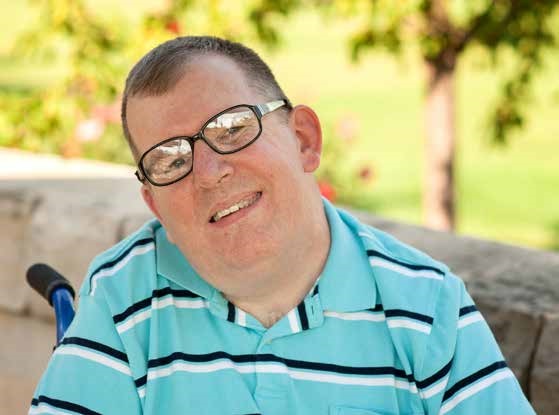 If I told you, “Take it one day at a time,” what does that mean to you? What does, “You need to forgive,” mean? It meant nothing to me years ago, until I experienced it. We learned the meaning of those clichés. Me, my husband John, my son Greg and my family.

A day at a time. Days in the hospital. Days waiting for a little boy to wake up from a coma. Night shifts to the hospital and back. Days of physical therapy. Days of prayer. Days of joy in a cottage, on a lake with children and grandchildren. A flashing moment of forgiveness. If you listen, I’ll tell you the story of how I learned to take life one day at a time. I’ll tell you how I learned to forgive.

Our days in retirement now seem busier than when we were young. In the morning, John takes care of Greg’s breakfast and shower. Greg always wakes up at 6 A.M., and then I take care of his clothes and teeth cleaning, nails, all those little things. Then John drives him to Hillcroft. He’s been there 36 years. Greg is 52 now. 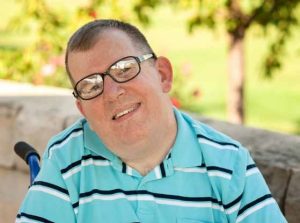 He has friends at Hillcroft. He had a girlfriend for a little while. We have dinner in the evening together, or go to a game . . . volleyball season is coming up. John and I have our time, too. The only thing different, I guess, about our life is that we can’t drop everything and do something spur of the moment. We’ve been really blessed with the sitters we have through Hillcroft. They’re fabulous. Corey and Cheryl and Vicky. Greg loves them.

The accident happened when Greg was 11. He was very, very bright, a straight A student, high IQ. He was involved in church, in fact he was a lector. We go to St. Francis. He was in the Boy Scouts and always active in sports.

Greg was in the hospital a year-and-a-half. First, he was taken to Parkview in Ft. Wayne, then he came here to Muncie at Ball Hospital. Then he went to Community . . . no, first he went to Riley. It’s hard to remember the timeline exactly. He was unconscious for almost a year before he went to Riley Children’s Hospital. Then he went to rehab at Community East. When we brought him home he was still in a wheelchair, still in diapers. But he made a lot of progress after we brought him home. Years of speech and occupational therapy and physical therapy.

At that time, he went back to school at Morrison Mock. The school had a wonderful physical therapist who worked there, Jenny. I had a van with a lift for the wheelchair, and when I went to pick him up one day, he . . . walked . . . out to the van! Everybody was out there. The whole school. It was a surprise because I didn’t know he was walking! That was three years after we brought him home. He was 16 when he walked. And when he started going to Hillcroft. Now if we go somewhere, like a volleyball game, we take his wheelchair. But here at home and at Hillcroft, Greg can walk with assistance.

We’re really thankful he understands most things and has an even-tempered personality. He’s social, happy.
He likes to be with people. Greg only speaks about 12 words, but he understands everything. We have a lot to be thankful for.

In the hospital we had a tape recorder playing right by his ear, all the time with our voices and his brothers voices. We wanted him to have as much stimulation as possible. You know, the nurses are in and out and the doctors see him once a day. So we were seeing things before they did. And then one day, I was sitting in his room and he had some toy trucks on a tray up high. He was reaching for them. I said, “Are you trying to get those, Greg?” And of course he couldn’t say anything. So I handed the toy trucks to him and I could tell he was glad. You tell the nurses and they would chart it. And you tell the doctors and they would shake their heads and say, “That didn’t happen.” We read articles that said, “The more stimulation they have, the better it is. Stimulate them as much as you can to wake them up.” And so we did.

The accident happened in the fall and it was the middle of summer the next year, and he was still not waking up. We asked the nurses if Greg could be taken outside on the gurney. There’s a fountain in the courtyard. The nurses were happy to do it, they were wonderful. But of course, you have to have an order from the doctor. The nurses would say, “We’ve asked the doctors and they won’t give an order. They think it’s insane, they think it’s silly.”

So John called the doctor, and honest to God they went round and around and around. They did. The doctor wasn’t even nice about it. He said, “I’ll write your mm-mm order.” And he did. It wasn’t two weeks after they started taking him outside, you could see him coming around. Was it coincidence, was it timing, or did it help? I don’t know. And the doctors realized, “You know what, he’s coming out of this coma.” And they wanted him to go to Riley.

Greg is the oldest. We didn’t take his brothers to see him for a long time. It wasn’t until Riley where we started thinking that Gary and Grant, Greg’s two younger brothers, needed to see him. When the boys first saw him, they climbed in bed with him. Both of them. They didn’t hesitate a minute. They had their arms around him, and they were in bed with him, and talking to him.

The accident. We haven’t talked about that yet. Greg was with a group of Boy Scouts. They were coming back from camp. It was a station wagon loaded down with kids; this was before minivans. The scout leader ran a stop sign at highway 3 and 218.

I’ve asked him this many times, “Greg did you see the car coming, do you remember?” Yes, he remembers it. Greg and his friend EJ had an argument that day over who got to sit by the door in the car on the way home. Greg won the argument. You know, a lot of the kids and his friends shied away from Greg after the accident. But not EJ. EJ would come over and he would take pictures of the two of them, and develop the film himself. Later he went to Notre Dame, but he would always come back and see Greg. And he would sit for us. Greg needs help with everything, even going to the bathroom. And EJ would do that.

The other car that hit them, the one that T-boned the Scout Master’s car, they were an older couple. They both died instantly. I really struggled with this Boy Scout leader for a long time. And I knew I had to forgive. We are taught in the Lord’s Prayer that we have to forgive. I couldn’t do it. Someone told me, “Write a note, tell him how you feel.” I wrote him a note, so as far as he knew I had forgiven him. But I didn’t believe a word I said.
Then one day I ran a stop sign. It wasn’t that long ago . . . 4 years, 5 years ago. I was coming back from church, and I ran a stop sign. I don’t know what I was thinking about, preoccupied I guess. These two Ball State students were going through the intersection. I’m in a big Tahoe and they’re in a little bitty car. I hit the front of their car and about took the front end off it.

You know what, those girls were OK, one had a bloody nose. If I had hit them further back in the car I don’t know what would’ve happened. It was my fault, I told the police right away it was my fault. I felt horrible. But I forgave the Boy Scout leader, immediately. I thought, how quickly and how innocently something like that can happen.

You know everyone told us, “Take it a day at a time.” That didn’t have any meaning then. The accident happened in October. We didn’t want to have Thanksgiving or Christmas; we had no desire. But we had to because we had two little boys at home who needed us. We learned to take it “an hour at a time,” when Greg was so critical. It’s not just a cliché. There’s real meaning inside that you have to find for yourself. Our sons, they kept us going and laughing. A day at a time.

Forty years later we’ve had a rich life: work, friends, weddings, grandchildren. And the Lake. I can see in my mind all the days in our cottage on Lake Chapman. I can show you a wall of pictures. Greg swimming with his life vest. Greg splashing me, and playing with his nieces and nephews. Cousin’s week. Special days. John and I passed out on the couch, exhausted and peaceful. Family traditions that have grown up around us. We say, “The lake is where we can pack a little luggage but leave our baggage behind.”

Perhaps another cliché, but it means everything to me.

Written by:
Stephanie Fisher graduated from Ball State University with a degree in English. She lives in Muncie with her husband and two daughters and is a content developer for SpinWeb. Stephanie loves reading, cooking, home brewing with her husband, and visiting new places.