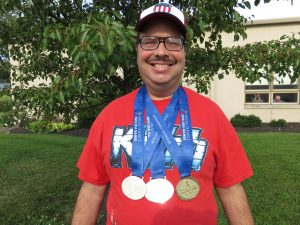 Meet Jim Benadum, he receives services at Hillcroft and is also a Special Olympian!
The Special Olympics is an international organization that provides year-round sports training and athletic competition in a variety of Olympic-type sports for all ages.
Jim got started as a student at Morrison Mock Elementary with the softball throw, and now at 44 years old has found a love for Bocce and has been playing the game for 14 years!
Bocce is sometimes referred to as lawn bowling and originated in Italy. In Indiana Bocce is considered a master sport, which means you have to be 30 years old before you can play in competitions.
Practice was a big part of the preparations, and Jim practiced with his coaches Diane Benadum, Cheryl Brown, Lisa Holt and Linda Sollars every Thursday leading up to the competition. The coaches prepared several courts at Hillcroft by painting the grass to outline the court size. He also practiced on the Field Hockey fields at Ball State University.
Jim is no stranger to big competition with Special Olympics. Jim typically competes in the State Games (held in Terre Haute) in the sport of Bocce, sometimes for golf, and sometimes bowling too!
To participate in the National Games, the Special Olympian has to be nominated by their County Coordinator, win a gold medal in their sport at the State Games, and then be picked by the state to compete at the National level.
Jim competed in the 2006 National Games (held in Ames, Iowa) and the 2010 National Games (held in Lincoln, Nebraska). Both of these Special Olympic Bocce games were held inside a building with an artificial grass playing surface, and Jim played with another Special Olympian as his partner.
For his 3rd trip to the National Games in Princeton, New Jersey Jim represented Team Indiana in Bocce with a new unified partner, Lisa Holt. (Unified means a Special Olympian plays with a non special Olympian). Jim and Lisa won gold medals in Unified Doubles and also won gold medals in the 4 person Unified Team! And despite the challenges of heat, rain, and playing under the lights, Jim also won Silver in Singles!
Congratulations, Jim! Your Hillcroft family is proud of you!